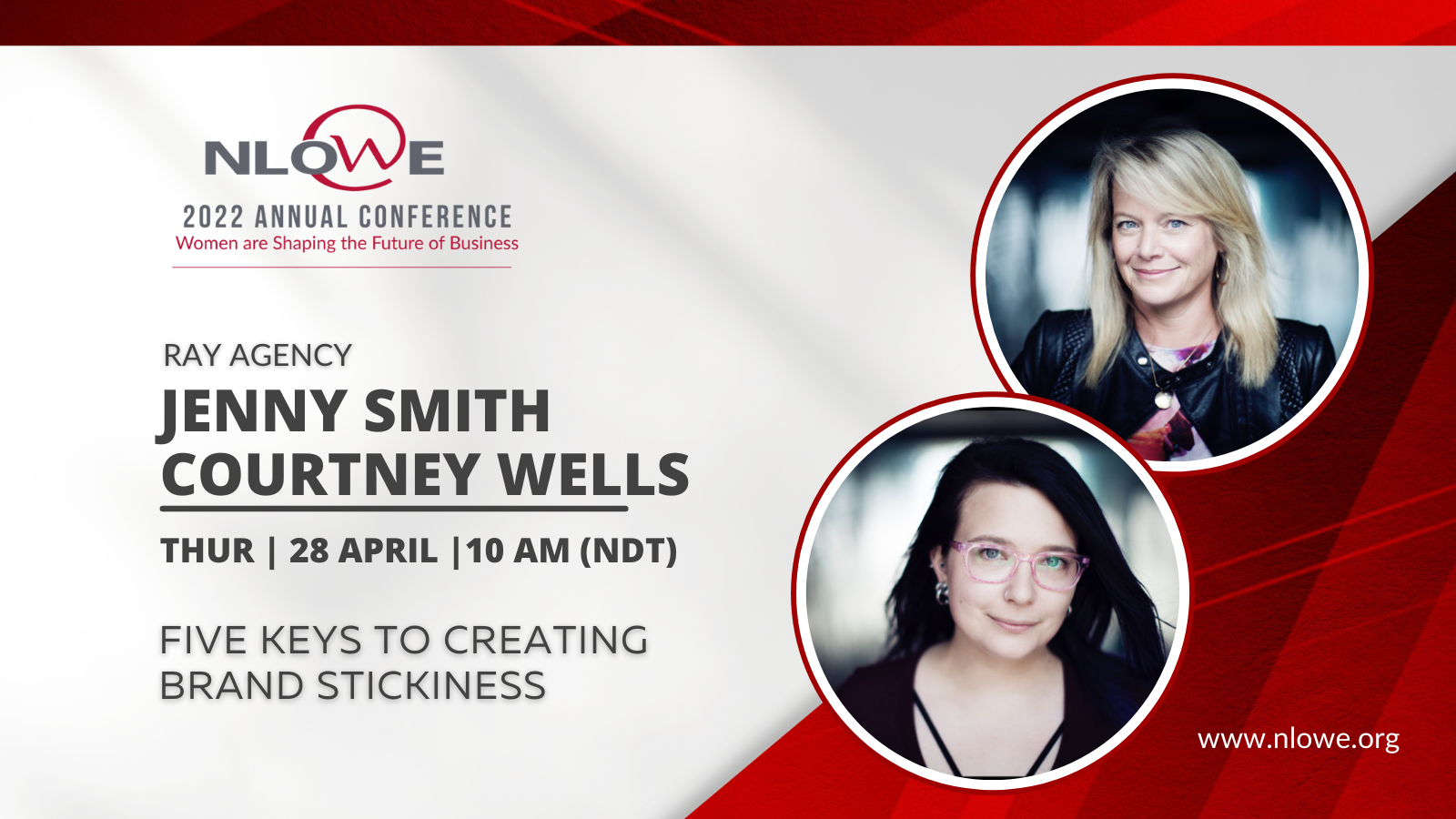 NOTE:  This session is part of NLOWE’s Virtual Conference,  if you have purchased an All Access Pass you are already registered for this event.

In this dynamic presentation, we walk the attendees through what exactly a brand is (not always an easy thing to define), as well as key considerations and insights into what makes a brand stick, and stick-out to audiences.

The presentation includes real-world examples of brands that have done this effectively (and how), including internationally-recognized global brands as well as some examples from right here at home.

JENNY SMITH — President / Executive Creative Director, Ray
With over 25 years in the advertising business, Jenny is no stranger to creating internationally recognized, award-winning work. She’s ranked one of the top creatives in Canada, has won hundreds of awards including a few gold Cannes Lions, and has judged every ad show in the country. Perhaps one of her biggest accomplishments was representing Canada at the Cannes Lions International Festival of Creativity where she had the honour of judging in 2009 and again in 2018 – the only woman east of Toronto to be invited twice. But unlike most ad veterans across the country, Jenny lives nowhere near Toronto. Or Montreal. Or Vancouver (although she likes shopping in those places).

After working for other people for 15 years, she took a giant leap and launched Ray in 2013 – a strategic and creative boutique that’s proven to be one of the hottest shops in Atlantic Canada. So far, her team has received many accolades and awards including the Top 50 Start-Ups in Canada according to PROFIT and Canadian Business and Maclean’s, ranked one of Canada’d Top Growing Companies according to G&M’s Report on Business, E&Y EOY Finalist, NLOWE Start-Up Entrepreneur of the Year Award, ICE Best of Show, ABM’s Top 50 CEOs (four times), St. John’s Board of Trade Winner in Growth and Sales, and various other creative-related awards – all in just 8 years.

Jenny sits on various boards, including Ever Green, Artistic Fraud, Opera on the Avalon and Genesis’s Client Success Committee. And mentors women through the AXIS program for the Association of New Canadians and NLOWE’s mentorship program. She lives in St. John’s with her husband and is a proud mother of two teens, James and Mary, and cat Nacho Smith. Who like some of her work.

COURTNEY WELLS — Senior Design Lead, Ray
Courtney Wells loves design. And we love her. A graduate of CNA Graphic Design Program, Courtney is a bright mind with equally bright hair, and a special affinity for the colour purple. With over 10 years’ experience in the ad and design business, she’s not afraid of a deadline or juggling multiple requests. Throughout her career, she’s worked her special blend of magic for clients like RRFB, Dairy Farmers of NL, Cape Breton University, Cahill, Lakeland, Government of Newfoundland and Labrador Mental Health Awareness, RNC, Marble Mountain, and Newfoundland Power.

This ICE Award-winning production designer also loves playing with words. So much so, she started a side gig of putting Newfoundland sayings on stickers and buttons. And she puts her love for typography to good use for pro-bono initiatives like the Vagina Monologues. A self-proclaimed sci-fi nerd, Courtney is a big fan of comic books, peanut M&Ms, and the Beatles. When possible, all three at the same time.

ZOOM — PLEASE NOTE:  THE LINK FOR THIS EVENT WILL BE EMAILED TO PARTICIPANTS ON THE MORNING OF THE EVENT. If you do not receive the link contact info@nlowe.org.
St. John's, NL Canada

Discounted tickets are only available for registered members.

Please login or sign up to avail our members-only tickets.